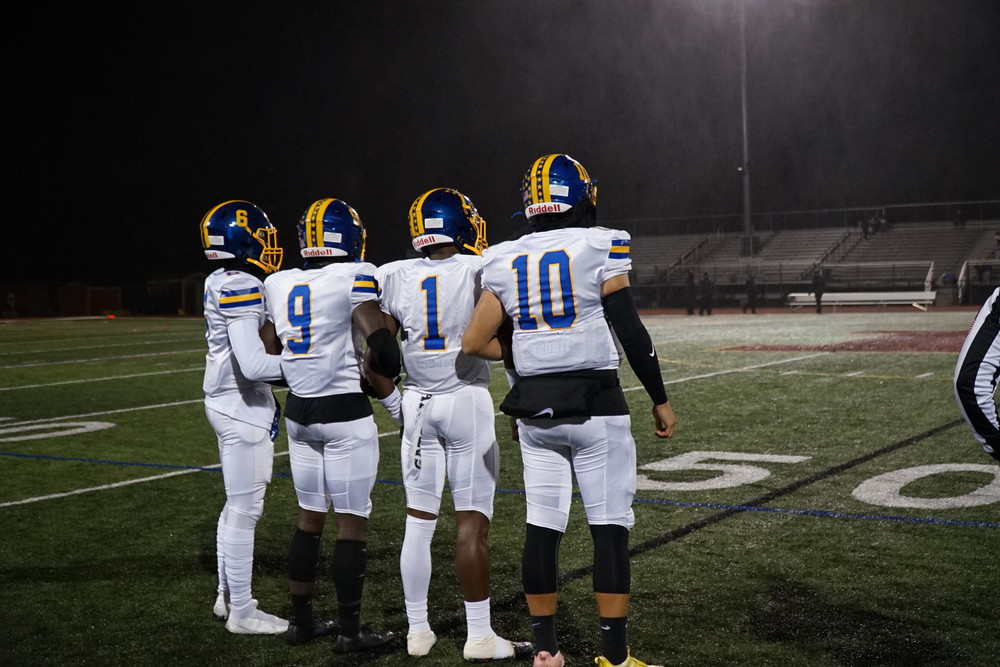 One Team, One Dream.

That was the mantra spreading around the team since the playoffs began, and now they’re one win away from realizing that dream. The Raiders, in the most important game of the decade, marched into Cherokee and defeated the Chiefs 34-21  to send them to the state finals. This game was viewed as a walk in the park for Cherokee; many thought that they would stomp the Raiders and move to the finals and the point spread reflected that. That spread had Cherokee at -22. This team is special though, and they proved just as much tonight.

The game however started as all of the pundits believed it would, with the Chiefs jumping out in front early with an onside kick recovery, and on their first play from scrimmage, RB Brandon Boria bull-rushing up the middle for a 49-yard touchdown to give Cherokee a quick 7-0 lead. Then later in the 1st quarter, Chiefs QB Ryan Bender ran it into the endzone for a touchdown and a 14-0 lead. Little did they or anyone know that these would be the final points that the Chiefs scored outside of the last few minutes of the game. The Raiders went to work on this drive as Raiders WR Marquis Perry caught a 21-yard pass from QB Frankie Garbolino to get them in business. Then later in the drive, Perry ran in a 4-yard touchdown to put the Raiders on the board 14-6. The Raiders defense then went to work and forced a massive turnover-on-downs in NB territory to give the offense the ball back and they certainly made it count. Another long pass to Perry got the Raiders’ next drive cooking and it was capitalized by a 3-yard touchdown pass to Jayden Myers and a 2-point conversion caught by Brandon Harrison to even up the score at 14-14 to go into the half.

The cold Marlton bleachers were rocking for both sides, giving the stadium a true playoff atmosphere, and the Raiders responded by showing their playoff intensity early and often in the 2nd half. It started off with a massive interception by Marquis Perry on the Cherokee 12-yard line, giving the Raiders prime field position. A 10-yard pass to Jayden Myers put them on the 2-yard line and a Frankie Garbolino touchdown gave the Raiders their first lead of the game and a lead that would hold up for the rest of the contest. The defenses settled into a stalemate for 3 straight drives. The stalemate came to an abrupt end when Cherokee fumbled on their own 49 to give the Raiders the ball back with 3 minutes left in the 3rd. The Raiders used this momentum to shave over 5 minutes off of the clock and punch it in courtesy of a 10-yard touchdown to Zahmir Dawud to extend the NB lead to 26-14 with 10 minutes left in the game. On the next drive, the Raiders defense made another massive contribution to this game as Brandon Harrison picked off Bender on the Chiefs 47-yard line. It was then after a 10-yard pass to Harrison, that the Raiders put the dagger into Cherokee as Jayden Myers ran in a 30-yard touchdown to make it 34-14. The crowd fell silent, stunned at the outcome of what was supposed to be a walk in the park. It was then in the end that the Cherokee offense woke up and marched down the field for a 2-yard touchdown to make the score 34-21, which would prove to be the final score in a classic.

Wow. Undoubtedly the biggest win in recent memory for this team for a plethora of reasons. They walked into a heavily favored game for Cherokee in Cherokee and got revenge for 2019 while also keeping their season dreams alive today. The Raiders came into the game with a massive chip on their shoulder which only increased when it came out that Cherokee was favored to win by 22 points, which Marquis Perry had some words for. “We don’t listen to the papers, they been doubting us since day one and honestly we love being the underdogs because you have no choice but to go out there with your back against the wall swinging until you can’t no more, and that’s exactly what we did.” Perry also gave some well-earned love to his teammates and coaches saying, “All of my brothers did their job to the best of their abilities including the coaches and the results showed it. It stays the same next week though, One Team, One Dream, and we can see that dream.”

Now the question becomes for the Raiders, how can you follow up the biggest win in the program’s recent history and if they even can against a lethal offense in Hillsborough? The moment is the biggest in school history and Frankie Garbolino is prepared for it all. He said, “It’s huge for all of us, we all want to be that team to go down as the ones to do it. The past few years, we’ve made some nice runs, but we never went all the way so this would be huge.”

The other storyline to follow next week is the departure of the two Raider superstar receivers in Perry and Jayden Myers. Aside from the obvious collective goal of a championship, these two want to go out with a bang, especially Jayden Myers. “We’re coming into this game with that same chip on our shoulder that got us the win tonight. This one is personal for us, especially with a championship on the line and the memory of what happened in October. We know who we are and what we’re capable of and we’re gonna let everyone see it on Friday.”

Potential. That’s all any team needs in any playoff format, no matter what sport, any team can win on any given day. The most talented team in Raiders history has a chance to put their claim to fame next Friday to go down as school legends. All they need is a shot against any team, even a powerhouse like Hillsborough. The star power on this team is incredible and has the ability to carry us to heights never imagined, and it’s all 4 quarters away. The defense definitely has their work cut out for them seeing as Hillsborough has put up 98 points in two playoff games but if the defense can play as they did against an offensive machine like Cherokee, then you can believe that they’re gonna give Hillsborough a good fight. The team has lived by One Team, One Dream all year, and now that dream is 4 good quarters away from being realized.

The Raiders will play at Hillsborough on Friday, Nov. 19th.