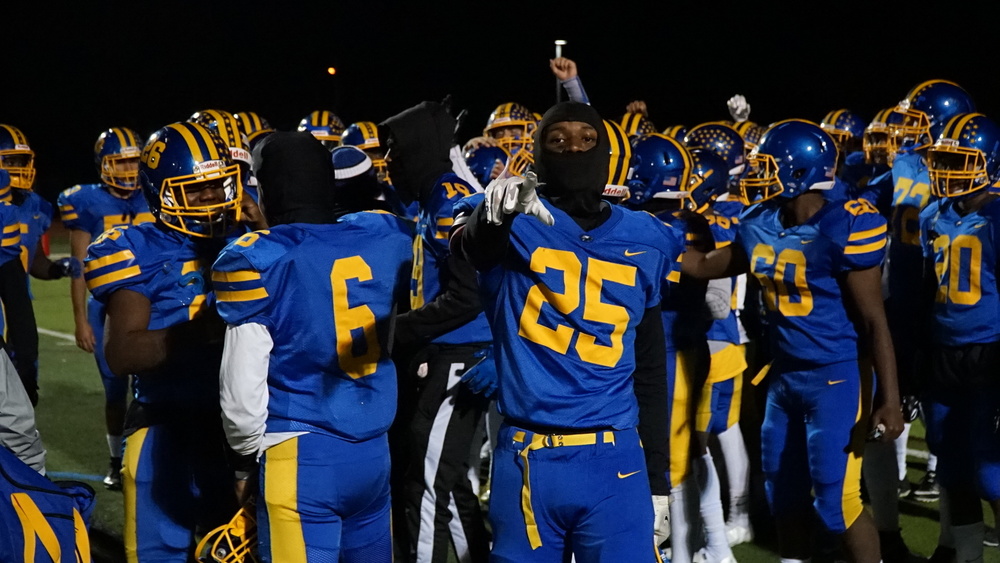 Raiders Advance to the Semifinals

The playoffs are always exciting, no matter what level or age group you may be following- this is what your team works towards. Since the beginning of the season, the goal of the North Brunswick Raiders has always been getting back to the promised land with this dynamic core formed. Tonight, the Raiders showed everyone why they’ve been highly ranked and touted by reporters and teams alike. NJ.com even had the Raiders as unanimous favorites to beat the 5-4 Eastern Vikings at Steve Libro Field. The chilling atmosphere always brings that feeling of a playoff classic, and that’s what we got.

The game started with Eastern receiving the opening kickoff and they immediately bull-rushed down the field in 4 minutes. The drive was capped off by a 6-yard touchdown run by Jasiah Davis to jump out to an early 7-0 lead. Then, on the ensuing kickoff, the Raiders fumbled the ball which Eastern recovered on the NB 20 for some incredible field position. The drive was looking like a major defensive stand on the 1-yard line until Davis ran in his second touchdown of the game in 4 minutes to stretch the lead to 14-0. On the very next drive, Raiders wide receiver and now the school leader in All-Time Receptions, Marquis Perry, did as Marquis Perry does, and took a slant pass to the house for a touchdown. A missed extra point made the game 14-6 and there was a sense of ease setting into the freezing stadium. A key stop on defense forced a 3-and-out for Eastern and would place the Raiders in prime field position to break out a play that we’ve never seen before.

Coach Michael Cipot this season has kept the playbook relatively simple: get the ball to the big guys in many creative ways and let them do their thing. But the playoffs are a different story entirely. Cipot called several gadget plays like splitting QB Frankie Garbolino out as a wide receiver on their first offensive play of the game, doing direct snaps to receivers like Marquis Perry, or the one that hit paydirt, a 42-yard reverse handoff which saw Perry take a direct snap, flip it back to Garbolino, and then bolt downfield for the long touchdown. Despite the unsuccessful 2-point conversion, the score was still close at 14-12 with 2 minutes left in the first quarter and the stadium was rumbling. The playoff atmosphere was truly shown to everyone when Brandon Harrison secured an interception and ran it back for a touchdown for the Raiders’ first lead of the day. The ensuing 2-point conversion would make the game 20-14. An Eastern field goal however would bring the score to 20-17 at the half.

A Raiders 3-and-out would lead the way out of the gates and the NB defense being completely unable to stop the run brought the Raiders to an uncomfortable spot which only got more uncomfortable when Eastern took the lead 24-20 on a touchdown. That lead would last for a cool 10 seconds though as Zahmir Dawud ran his way through the entirety of the Eastern special teams unit to give the Raiders the lead right back, 27-24. It was here when the Raiders transitioned into 2nd half mode once again and turned the game into a defensive stalemate of 3-and-outs and turnover on downs. With every play, you could just feel both sides of the crowd getting more and more tense, each knowing that their season could be changed by one play. The game was like this until Jasiah Davis ran in his third touchdown of the day, giving Eastern a 30-27 lead with 7 minutes left to play in the game.

The Raiders offense, on their biggest drive of the season, needed a response. The drive began with a Garbolino strike to Perry along the sideline, then continued with a Jared Tynes rush to the 11-yard line. And then the money-play was put to use. The Raiders broke out the jet-sweep to Perry to secure the 11-yard touchdown and the lead that they wouldn’t give back. The biggest stop of the year happened on the next drive when the Raiders stifled the Vikings offense to give the ball back to the Raiders and with 30 seconds left, Garbolino put the dagger into the season of Eastern by running in a touchdown to give NB a 39-30 lead, which would hold to be the final score.

The playoffs has always seemed to be this program’s Achilles Heel with a total record of 6-11 but this team feels different and the team knows it. Marquis Perry believes this too but knows how to stay level and humble. He said, “We just need to treat every game like it’s any other game we’ve played this year. Keep working hard on and off the field, keep the energy up, fix the minor mistakes, respect our opponent and keep our eyes on the prize.” He also told me that the team is playing by a mantra going into these playoffs, “One Team, One Dream.”

The road ahead for the Raiders pits them against an old foe, the Cherokee Chiefs who knocked out the Raiders in the same exact spot in 2019. Cherokee has always maintained a high-flying offense and a suffocating defense and that’s no different this year. But this is a different Raiders squad, a much more complete one. A team that can beat you from the air and on the ground. A team who, when on, can strangle offenses and shut them down. One more thing this iteration of the Raiders has over the 2019 squad, that unifying rallying cry in their locker room. One Team, One Dream. That’s all these guys need, One Team, One Dream.