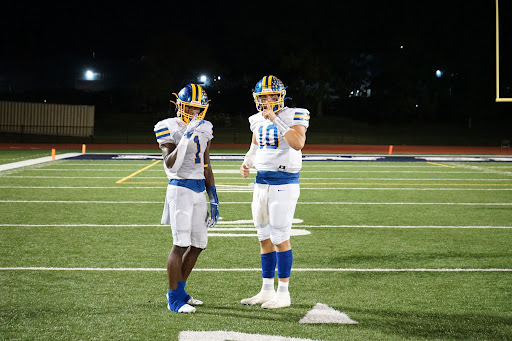 Every year, there’s always a few games on your team’s schedule that you schedule, no matter what sport it may be. This was universally circled and it certainly didn’t let anyone down. New Brunswick came into this game after winning a thrilling nailbiter vs Piscataway while the Raiders came in on a tough loss. This game had major playoff seeding implications in the BCC with the winner likely sitting pretty in Conference play.

The game opened with the Raiders methodically marching down the field in 3 minutes and capping it off with Frankie Garbolino finding Marquis Perry for the touchdown (with a missed 2-pt conversion). It seemed like a fun, offensive shootout was going to be in store as New Brunswick punched in a touchdown of their own to take a 7-6 lead. After that though, things cooled down for a while and a defensive stalemate ensued with both teams trading punts for about 10 minutes.

This all changed though when Garbolino found Jayden Myers in the endzone for the touchdown along with the successful 2-point conversion thanks to a Garbolino scramble. The Raiders took this lead into the half with a blend of emotions and confidence coming from the giant, one-sided bleachers. The confidence only grew stronger as the Raiders got a key interception from the returning Tamir Jenkins and capitalized on it by punching in another touchdown to make it 21-7. Of course, the rivalry wouldn’t be complete without some drama at the end. New Brunswick immediately marched down the field and with 6 minutes left; Tyay Henderson made a great catch along the sidelines for the New Brunswick touchdown, skimming the lead to 21-14. The name of the game though for the Raiders was ball control in this late stage and it’s something that almost cost them. With about 2 minutes left, New Brunswick got the ball back on their own 20. But the Raiders defense bore down, forced a big stop, and sealed the biggest win of the season for the team. It was a win that Frankie Garbolino knew was huge. He said after the game, “Last week didn’t go the way we wanted it to but we couldn’t dwell on it, we just needed to push forward, dig in, and get the machine running again.”

This win was absolutely monstrous for the Raiders as they get momentum going into the Homecoming game against 0-4 Piscataway. This is a Piscataway team that’s given up 149 points in 4 games. For a top-flight offense in the state, it’s fair to think that next Friday is gonna be a wild one. With this win though, the Raiders sit in 2nd place in the BCC with another big chance to gain ground next week. New Brunswick however is on the opposite side of the spectrum as they fall to 4th place after the loss. New Brunswick faces another 1-1 opponent in the BCC in Edison.