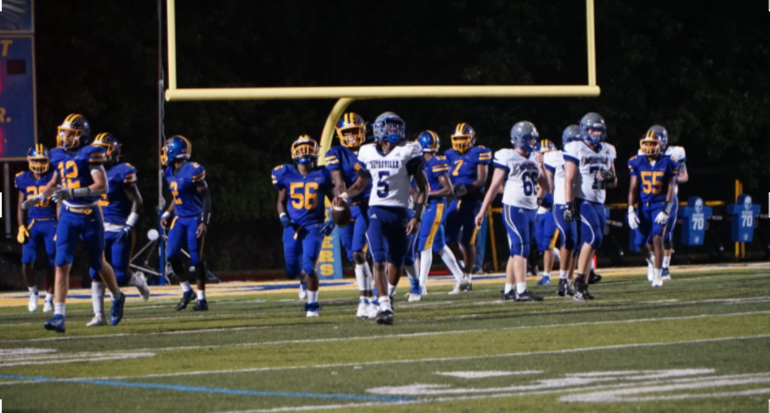 Remember that perfect start to the season at home? It was a cool, calm, beautiful night filled with North Brunswick hoisting the trophy over South Brunswick once again; well tonight was something much different. The Raiders came into the game 2-0 with convincing wins against good opponents like South Brunswick and Old Bridge while Sayreville came in on the other side of the stick starting off 0-2 with absolute meltdowns vs Bridgewater and Old Bridge, two solid opponents The first BCC game for both teams, however, went in a direction that left the Raiders, along with the town of North Brunswick, in a state of shock.

The Sayreville Bombers underwent somewhat of an identity change over the past 2 years, which isn’t uncommon at this level, and this new shift certainly bore fruit tonight. However, the Raiders sorely missed the defensive presence of two starters who were out due to injury: Tamir Jenkins and William Wilson; but in their absence came the strong emergence of Katrell Pereria who had a pair of sacks and an interception. Marquis Perry was another bright spot with another pair of touchdowns. The offense looked solid when on the passing attack with Frankie Garbolino keeping the defense on their feet with the arm and his ability to scramble. Outside of that, however, there were many struggles. The offensive line got called for double-digit holding/false-starts, the defense had absolutely no answers for the Sayreville rushing attack, and in the end, if you can’t stop the opposing offense, there isn’t that much of a window for success.

This loss stings for a few reasons: the Raiders let a winnable game against a beatable opponent go to the wayside, and they dropped their first BCC game which might come back to bite them when the playoff seeding starts to ramp up. The Raiders face a big game next week against New Brunswick in their house. While tonight might’ve been a setback, this is still a very strong team, and as the old saying goes, “you can’t win ‘em all.”