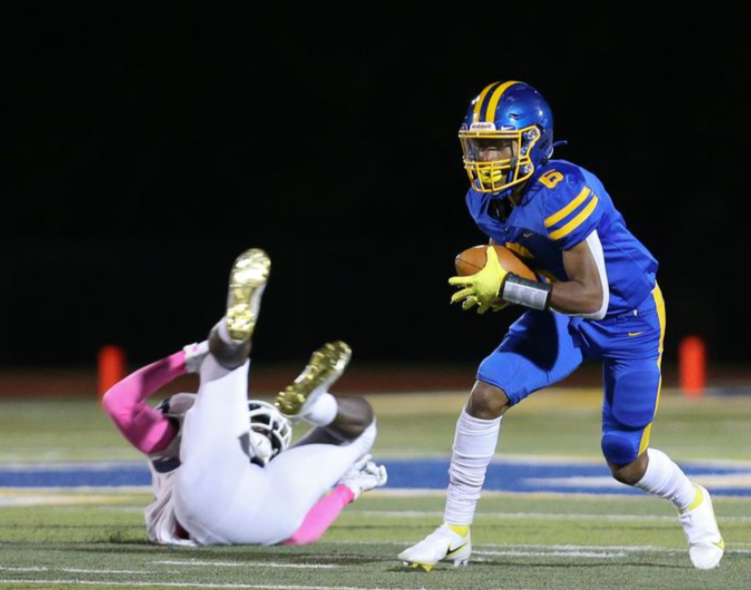 On a breezy, unflooded night, the Raiders held their first packed house in nearly 2 years and it felt so good to have everyone back in the stadium. It was everything you could want as a Raider fan: loud, exciting, and above all, a huge win. The Raiders’ offense put on an absolute clinic for the home crowd, unleashing 56 points on a new-look South Brunswick defense. Frankie Garbolino opened the scoring with a 14 yard touchdown pass to Jayden Myers. A drive later, the rushing game made its mark when Marquis Perry and Jayden Myers broke off 10 yard and 59 yard touchdowns. The game looked a bit shaky in the 3rd when South Brunswick scored 2 touchdowns in 10 minutes to tie the game at 21 but that wouldn’t last long. North Brunswick scored 35 unanswered points, 28 of them in the span of about 5 minutes. After the game was tied, the defense was absolutely suffocating forcing an interception from South Brunswick QB Vin Jairdullo and a fumble (which went for a NB touchdown). The big story tonight though was the complete emergence of Tamir Jenkins who forced and returned a fumble for 71 yards to the house. Jenkins then added a 5 yard touchdown run 3 minutes later.

This was a big statement win for our Raiders as they roll into Old Bridge next Friday at 7:00 pm.